Silver For Lily at Midlands

Silver For Lily at Midlands 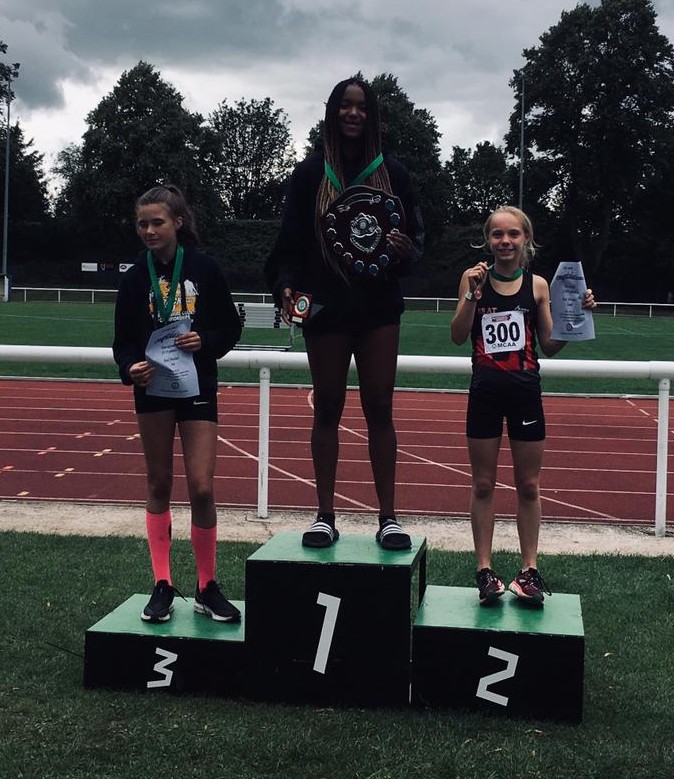 A silver medal was the reward for BRAT under 13 athlete Lily Smith in the Quadrathlon event at this weekend’s Midland Championships.

After running 13.50 in the 100m and throwing a pb of 6.72m in the shot, Lily put herself into medal contention. Another pb in the 600m of 1.50.28 and a leap of 4.88m in the long jump put her just 200 points behind the eventual winner – a great achievement all round, especially considering the size of the task given the height advantage the girls in first and third place had over Lily – See pic ! Her score of 3586pts was a club record, surpassing the previous held by Josie Williams by nearly 500 points. This was Lily’s 11th club record this year, a magnificent achievement.

In extremely blustery conditions with wind speeds up to 9m/sec and frequent heavy showers, making it particularly difficult for all athletes, there were 5th places in finals for Eve Godsal in the 75mH in a time of 12.55s, just 0.03s outside her best, Zachariah Humphries in the 80m H in a pb of 12.88s and Oliver Brown in the U15 800m in 2m 34.1s.

Keira Valentine was similarly busy but all her 3 events were crammed into a 45 minute period. She recorded a pb in both the 75mH in 13.63s coming 4th in her heat and 13.70s in the 100m heat finishing 5th, but ran out of steam in the LJ coming.

Simran Watson just missed out reaching the finals of the 75mH, being 9th fastest in the heats in 13.02s.

BRAT had a brilliant win the all ages 10000m race , where the club’s running machine, Dan Robinson won the race outright in a time of 33m 44.4s , an excellent result in the gales.

Meanwhile over at Alexander Stadium in the |National Masters Championships, BRAT enjoyed further success , where Hannes Petzer won the M40 Javelin with a throw of 48.87m and was 4th in the Discus with 33.92m. In the M40 400m James Colclough won the silver medal in a time of 54.41s.