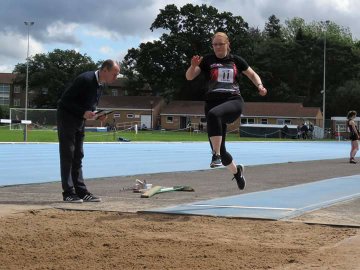 After the first two meetings of the track and field season the BRAT team are in fourth place, just a single point above the relegation zone.

We only had eight women available on the day so it was always going to be an uphill struggle, however we managed to finish fifth and were only nine points behind Wolverhampton in fourth place.

Our winners on the day were Alex Clegg who did a treble in the A string of the 110 hurdles, pole vault and shot plus winning the B string Discus.

Ren Zhang took the win in the B 110 hurdles and Hannes Petzer won the B shot.

With more women available for the second meeting at Coventry on Sunday 16th June the team looked  regain the lost ground by filling more events and as a result we finished a well-deserved third on the day and just three and a half points behind Gloucester who came second.

Multi eventers Alex Clegg and Hannes Petzer competed in six events each and amassed 81 points for the team.

Winners on the day were Alex Clegg – A string wins in the pole vault and shot, B string wins in the sprint hurdles and javelin. Treble wins for Hannes Petzer – Discus, Hammer and Shot B strings. Molly Browne winning the A 800/1500m double. Martin Matthews won the B 3000m, Jonny Briggs won the discus A (great effort considering he just made it in time from a house viewing!) and Richard Carney who won the B 2k steeplechase in a torrential downpour – it’s no exaggeration to say that it’s the first time a competitor in the steeplechase was soaked through to the skin BEFORE they went through the water jump!

Therefore after two meetings the league standings are as follows;
Rugby and Gloucester are joint top on 11 points, Coventry are on 7 points, BRAT on 6, Wolves on 5 and Cheltenham bring up the rear on 2.

All to play for at the next meeting – Rugby Saturday 6th July, please make yourselves available.