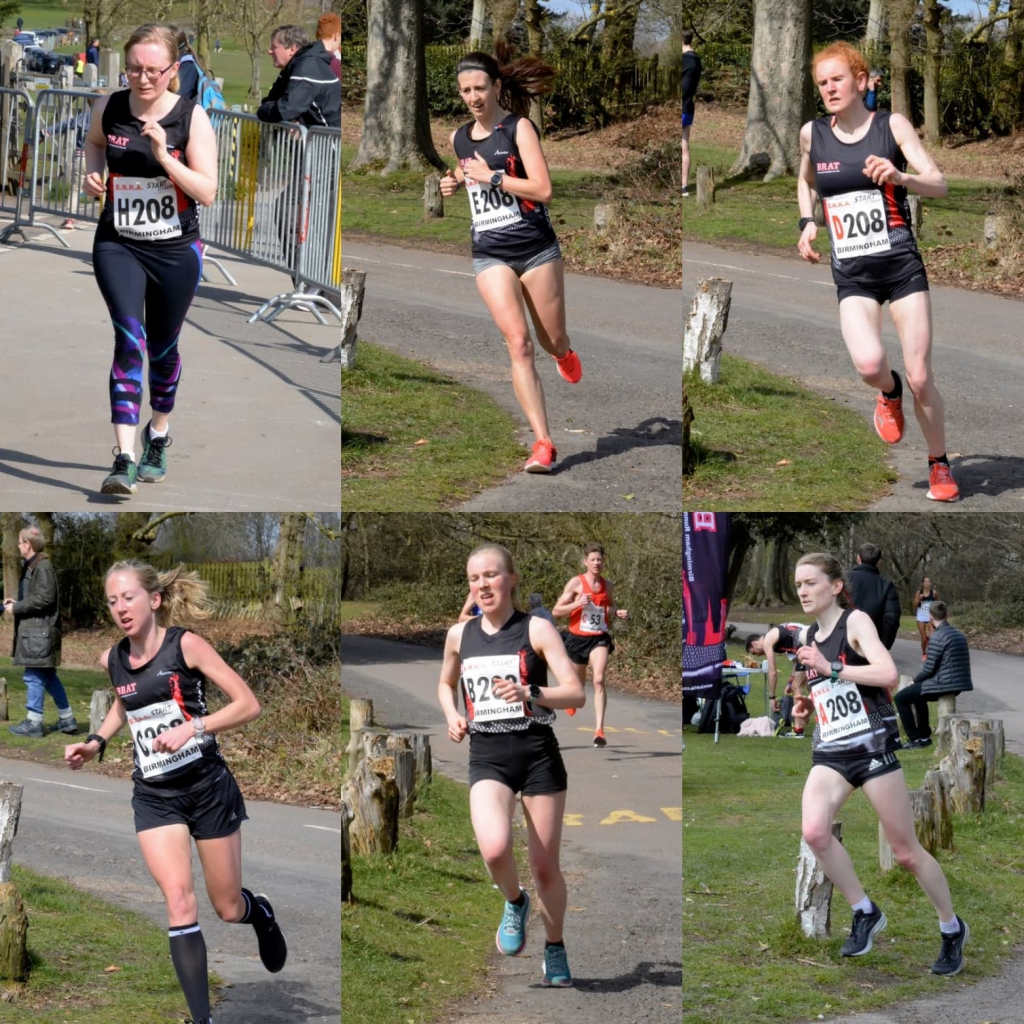 Another Saturday afternoon in Sutton Park, this time for the National Road Relays. Fresh from the test-run over the same course at the Midland championships two weeks ago, Team BRAT were ready to race against some of the best clubs in the country. The women saw the men head off on their quest over the 12-stage event before Molly Browne lined up ready to get the 6-stage underway for Team BRAT.

It was always going to go off fast and as the gun went, the first-leg runners charged down the initial hill. A rather windy out and back made for a tough leg but it was downhill from the stone (except those final two hills and the uphill finish). With a kick for home, Molly finished in 13th place, a great start for the team. Next up was Anne Kenchington on the first short-leg of the day, with a brilliant Midlands performance behind her Anne looked very in control as she flew round the first hill loop and set off up the slow-climb. Anne had maintained the club in a fantastic position and ran a very similar time to her previous performance. Anne handed over to Jen Straw who set off on another short-leg. Jen had a brilliant run, by this point the field was quite spread and with the Women’s and Men’s races overlapping it was difficult to keep track of the races. Working hard past the pond and the hills to the finish Jen had a fantastic run, again a very similar time to the Midlands in tougher conditions. Leg four was another long-leg and off went Annie Byrne putting her marathon training into practice for the long out and back. Annie had a superb run, catching Leeds City B and Cambridge to bring BRAT up to 12th place as she handed over to Sophie Dalley. Having run an excellent long leg at the Midlands, Sophie has swapped for some speed and a short-leg at the National. Flying down the back straight of the course into the final climb to the finish Sophie was having a brilliant run. Declaring afterwards she had been aiming for sub 26 mins, that target was obliterated by 90 seconds – Sophie also went on to PB in the Leamington 10km the following day! Our anchor leg was Rosie Forster, who unfortunately had been side-lined for most of the cross-country season with an injury. It was great to see Rosie back in action, and taking on the challenge of the National road relays to complete Team BRAT. Rosie had a brilliant run, digging deep over the tough course and even managing to smile as she flew past the BRAT tent on the way to the finish. Team BRAT were rewarded with an impressive 28th, a top 30 National finish! Molly also achieved a top 20 fastest leg of the day finishing 19th overall. As well as a great result both for the team and each runner, the team spirit and excitement on the day was fantastic. After both the Midlands and Nationals performances, we can set some big goals for the 4-stage in the autumn! A big thank you to Eloise for organising the team, for Richard Carney who coaches most of the athletes and was there to support and keep a track of times on the day, and to the BRAT men, family and friends for support along the course – it was another great day to be part of Team BRAT.